I can’t let Ludwig have all the fun reviewing crime and thrillers. Here’s my review of a book I highly recommend.

Attica Locke creates stories rich in setting and character and entwined with history. (Bluebird, Bluebird) The plot of her latest, HEAVEN, MY HOME, is not only intense but complex and multilayered. Levi, the nine-year-old son of an Aryan Brotherhood leader, goes missing. Texas Ranger Darren Matthews is assigned to find him. As crime novels go, that would be ordinary, except Matthews is black and must follow the law even when faced with legal and moral issues. One of the settings he’s called to, Hopetown, was created after the civil war for freed slaves. Now white supremacists live there too, making a living off people who are nostalgic for anti-bellum Texas.

Matthews comes into the assignment with personal problems, including a mother who doesn’t have his best interests at heart, a vulnerable marriage, and a past investigation that haunts him. As a character, he’s so fully fleshed out that I feel as if I know him, making his story the kind I yearn for as a reader. 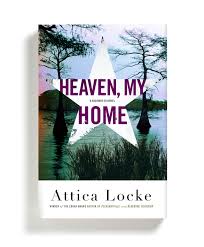 I won’t go into any more plot details as other reviews have covered those. I do enjoy how Locke interweaves Texas history in the novel, plus pulls us into a world in 2016 that is more conflicted than it was a few decades ago. Like a Pandora’s Box of Bigots, the racists have become emboldened and don’t fear the law. Levi the nine-year-old is a bad actor, but questions arise for Matthews as well as the reader as Matthews must put aside his feelings and search for the boy. Should Levi be held to same standards as his racists’ relations? Is his hate conditioning or something more rooted in his genetic make-up?

Locke leans heavily on the idea of forgiveness. Should we always try to forgive, or are there times we cannot afford to forgive?

I’m always drawn to crime and thrillers that ask big, bold, and uneasy questions like these. Early in the novel, Matthews says:

“Maybe the rules had to be different. Maybe justice was no more a fixed concept than love was, and the poets and bluesmen knew the rules better than we did.”

Maybe so. Think about that for a minute before you dive into the novel because once you do, you’ll be too swept up in not only what happens, but what choices the characters must make. Walk in their boots. Experience a time of both past and present, times that make moral and legal choices so difficult.

I’ve added this one to my stack as I love sister stories. I’ll let you know what I think!

Welcome to My FB Author Page

Welcome to My FB Author Page